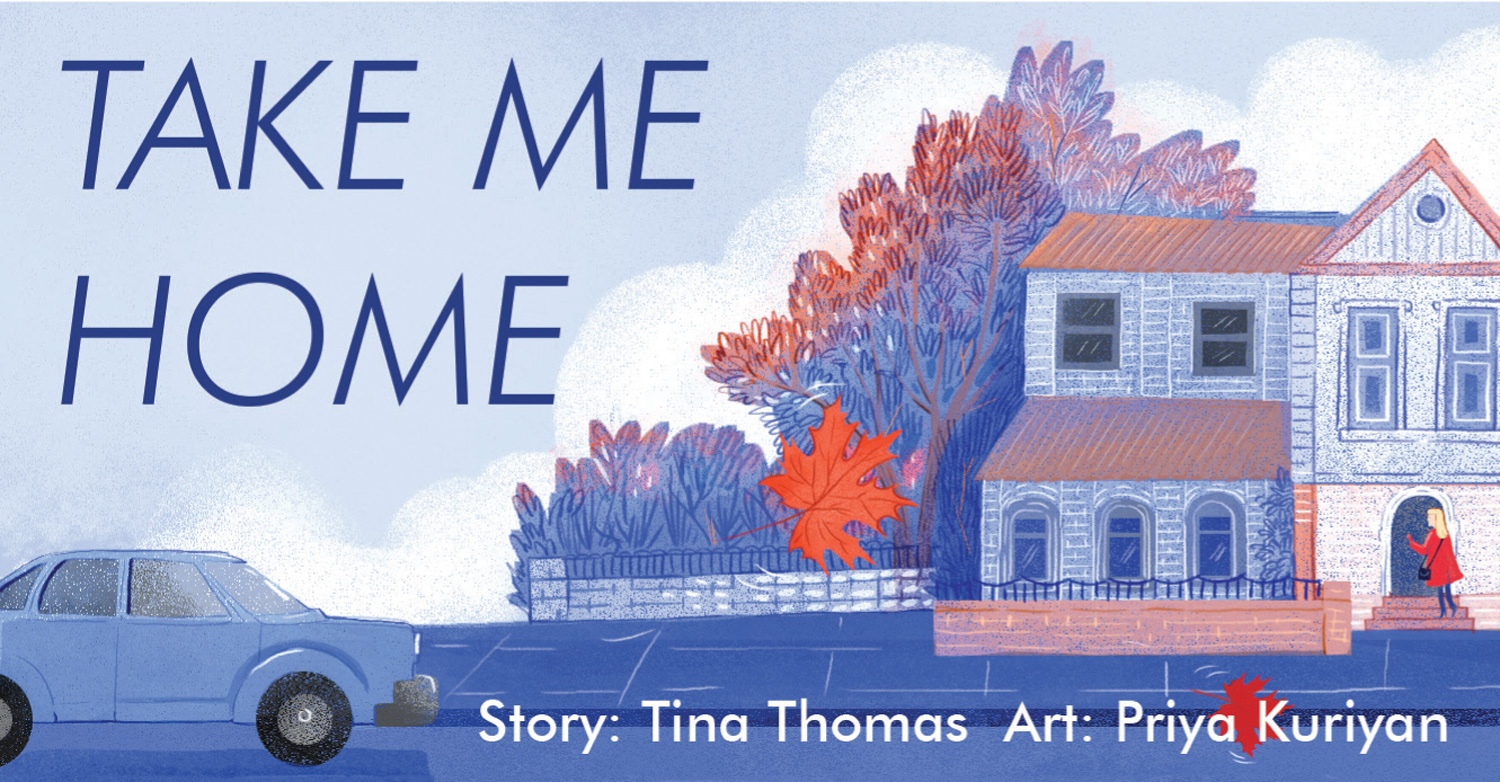 TAKE ME HOME explores the meaning and feeling of home beyond the physical space you occupy in this world. Home is where the heart is – but what if you need another person’s permission to live where your heart really is?

The seed of this story was sown inside me in September 2018, when Priya and I travelled to the United Kingdom (UK) and stayed there for a month as part of a comic creators’ exchange programme between Britain and India.

It was two years after the UK’s shocking decision to leave the European Union (EU), which put the future of millions of immigrants in limbo. While we were there, we could sense the rage, anger and helplessness brewing in both sides of the divide – the natives and the working-class foreigners. Posters and graffiti filled the walls and streets everywhere and people campaigned for both sides in many parts of the country. Brexit became an unavoidable topic at every dinner table, gathering and the front page of every newspaper. Not a single day passed without a mention of the inevitable doom that awaited the immigrant population. The word became so common in our conversations that often we misheard the word Breakfast as Brexit.

Yet, no one had much clarity on what was actually happening or how it would affect the lives of millions who stayed in the UK for work. Even the news reports didn’t shine much light on the subject. Between 2016 and 2020, the British Prime Ministers changed from David Cameron to Theresa May to Boris Johnson. Multiple rounds of debates, negotiations and votes took place in the parliament.

In a country that was already known to be racist, the “Leave” vote made things worse. The people who used to discriminate against people from other European countries got more authority and power to do so. They made sure the latters’ lives in the UK wouldn’t be peaceful if they decided to stay. Stares from strangers meant “Why are you still here?” / “Haven’t you packed your bags yet?” / “When are you leaving?”

Children were often bullied at school, but authorities didn’t take any action against this. Adding further insult to injury, the government imposed a fee of £1,330 on the UK visa for EU migrants who wished to continue living in the UK. Many of the working-class families could not afford this steep fee and had no other option but to pack their bags and leave.

I enjoyed my stay in the UK, especially the days I spent in the countryside with its picture-perfect meadows, vibrant colours of autumn and clear blue skies. I was so surprised to see garden flowers adorn the brick-red railway stations; they reminded me of the flower shops we have in India. The people we met were very warm and kind and made our stay extremely pleasant… and yet, I missed Kerala, the sound of my mother tongue, and my four darling dogs. I counted down the days to get back home.

This homesickness made me wonder about what the migrants in the UK must have been going through. Which is their home – is it this country where they have been living for decades and where they raised their families? Where they have good friends, a steady job and financial security? Or is it the place where they were born and grew up in? Will they be happy to go back to their homeland and reunite with their relatives and extended families if they are ensured a steady livelihood? Or, will they miss this land, the lives they lived and the friends they made, irrespective of the racism they have been subjected to for years on end? When they return home, how long would it take for their children to adjust to a new school, a new set of friends and a new culture?

All I had were questions without answers.

Three weeks into our visit, a Beluga whale was spotted in the river Thames near Gravesend. This incident immediately dominated the news in all the newspapers and television channels. People gathered on the banks of the river with their cameras for a glimpse of the uninvited but adorable guest; there was a lot of cheer and amusement around the subject.

More questions arose inside me. I thought about the poor thing that had got trapped in the river, thousands of miles away from its home. Was this young whale missing its family and feeling homesick – like me? How did it get lost? Was it because of climate change, something that we humans brought upon this planet? Was it being bullied by the other fish? Was it getting the kind of food that was part of its diet? How long could it survive in the river? How will it get back home?

What surprised me was that the same people who treated immigrant workers as enemies or thieves were very excited and amused about the whale’s visit! There was no fear or hatred towards the animal. Why was that? I wondered.

Why couldn’t they be as welcoming to the other outsiders in their country? What harm did those workers do? Is it because this whale was cute and adorable? Or even weirder, was it because it was also white-skinned?

Why do we discriminate against people based on their nationality, skin colour or the language they speak? Why do we consider people from other countries as a threat?

I drowned in questions without knowing the answers.

These questions slowly weaved themselves into a story that eventually took the shape of TAKE ME HOME.

After returning to India, I looked up the latest news about the whale. The British public had affectionately named him Benny. A few months later, it was reported that Benny had made his way out of the Thames. I could only hope that he had reunited with his pod.

I would like to believe that the families who had to leave the UK have found other means of livelihood and are living happily, wherever they are.